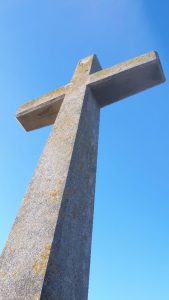 When is St Piran’s Day?

St Piran’s Day falls on the 5th of March and the local TV news usually shows pilgrims attending his chapel, in the sand at Perranzabuloe. There is definitely a strong sense of identity among the Cornish people. Also a sense of historic continuity, rich in spiritual beliefs and industrial labour. St Piran in a way, ties the two together. For many he remains a focus around being truly Cornish.

Who was St Piran? 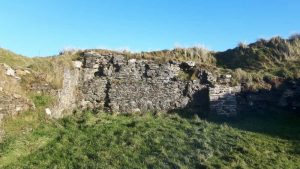 If you ask a Cornish person about St Piran, they may tell you that he is the patron saint of Cornwall. They may also say that he is the patron saint of tin-miners. The story goes that he floated to Cornwall from Ireland on a mill-stone and that he taught the Cornish how to extract tin from rock. So, St Piran’s flag, a white cross on a black background represents the molten white tin against the black rock. This is also the Cornish flag and can be seen all about the county. Although I think it may still be illegal to fly it, after the English Civil War and because the Cornish were mainly loyal to the crown. 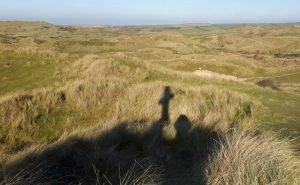 Nicholas Orme is an expert in the Cornish Church, based at Exeter University, he has written many books on the subject. In ‘Cornwall and the Cross Christianity 500 to 1560’ he brings an academic perspective to the stories. Early saints like St Piran had their ‘Lives’ written at later times. In this case perhaps 600 or 700 years later, at Exeter Cathedral. The author uses St Ciaran’s life as a base for St Piran because the names are similar.  In the life, we find that St Piran dies on the 5th March. Orme says there is no reason to suppose he is Irish and he was probably an early Cornish cleric or nobleman.

Orme also says that St Petroc was more important pre Norman Conquest and that Mary and Michael were popular from then until The Reformation. In those times there was no official patron saint for Cornwall. 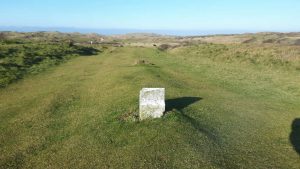 Making a Pilgrimage to St Piran’s Oratory and Old Church 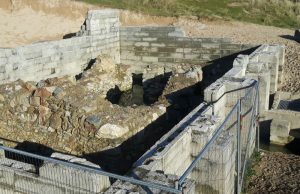 In January 2018 I took myself and my dogs to see St Piran’s church in the sand. A self-guided tour! From the pictures you can see it was a beautiful sunny day. The local dog walkers were very helpful and told me to follow the white markers. This worked very well and I found two structures. There is a good entry on Wikipedia, with all the information. I thought the oratory was sad looking. The protective structure around it has been much criticized, so I don’t need to add to that. The church site was more atmospheric as was the general location. Imagine these early Christians settling down in the sand dunes. I wonder quite why they chose the site.

If you would like to visit St Piran’s as part of a tour, please do get in touch via the contact me page. I love visiting the Cornish churches. At the time of writing the contact form is still not behaving. So an email is best, info@cornishheritagesafaris.co.uk